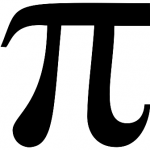 Today (3-14) is celebrated around the world by Pi Day enthusiasts. This year (2015) offers several bonuses making it a very special day – a once in a lifetime date for math nerds and dessert lovers everywhere. Let me explain a little about Pi so you can be excited and celebrate too.

By definition, Pi is the ratio of the circumference (the length around) of a circle to its diameter (the length across the middle). Pi is always the same number, no matter which circle you use to compute it.

When written, Pi is an infinite decimal. This means that it has infinitely many numbers to the right of the decimal point, and the numbers never repeat in a pattern.

The Greek symbol “π” pronounced “pie” was chosen as the letter to represent the number because it stands for ‘perimeter’ and is used to represent a constant.

Here are some resources to learn more about Pi Day and to find a way to mark this once in a lifetime experience: